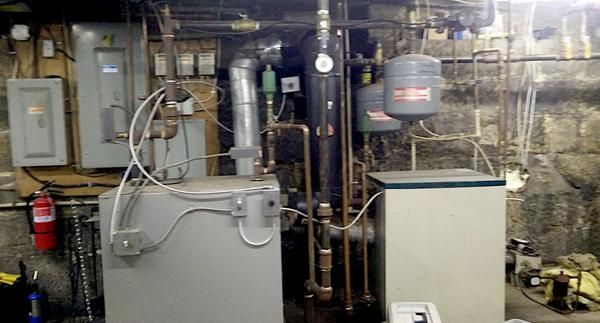 A.K.A. The Most Complicated Home Heating Solution Ever.

In our house where we've lived for two years now (a Civil-War-era brick farmhouse in the middle of nowhere -- note the cool stone work in the pictures), there are two boilers, one that burns oil and one that burns wood. Having two potential fuel sources was one of the many things that made the house attractive to us. Oil is annoying and expensive, but wood is abundant around us and when using the woodburner the house just feels warmer because of the slow, constant propagation of heat.

Until this winter, I hadn't used the woodburner much for a couple of reasons... one, I hadn't yet built up a supply of good seasoned firewood, and two, there were some logistical annoyances with using it. Since I do actually have a firewood supply now, I set out to fix those annoyances and burn more wood this winter. (Oil will still be the primary heat source because it's more hands off, but when we're there in the evenings and on weekends, we'll burn wood as a matter of course.)

Do you feel a draft? 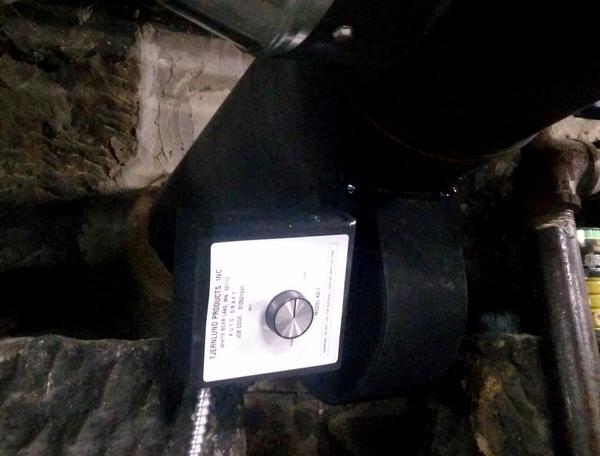 The first annoyance on the woodburner was the blower set up, which was very clearly hacked on by a previous owner. The way it appeared to work, there was a switch that would turn on the blower on the front of the ash door, which would push fresh air into the front of the fire... and you'd use that to help the fire get enough air until the chimney is hot enough to pull a draft. But the problem with that setup is that until there was adequate draft, the smoke would want to escape through every crack and crevice of the woodburner and smoke pipe out into the basement. So if I wanted to continue breathing, I would have to open the back door of the house and let some smoke out while making the fire.

In my previous house, the woodburner had a draft inducer in the smoke pipe, which worked well, though it had a similar problem because it wasn't installed close enough to the chimney and there were still high-pressure areas with imperfect seals where smoke would escape. So my solution for this problem was to get a similar draft inducer, but install it as close to the chimney as I could... that way all of the areas where there are imperfect seals are on the low-pressure side of the inducer, and air will be pulled in through those cracks instead of smoke getting pushed out.

Once the draft inducer was installed, I then removed the blower from the ash door, covered the hole with a piece of aluminum, and re-routed the switch wiring that originally ran the blower up to the draft inducer. I also reinstalled the chain for the automatic draft door control, which had been removed in favor of the electrically controlled blower. So now when flipping the switch, I get suck instead of blow, and once the chimney heats up I can turn off the draft inducer (assuming the wood is seasoned enough to burn well). The draft door, which is mechanical rather than electrical, then closes and slows down the draft when the water temp reaches a certain point. It works way, way better. So much so that Beth says she wishes she could smell the smoke more. Can't win them all, I guess.

Ticking away the moments that make up a dull day 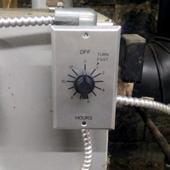 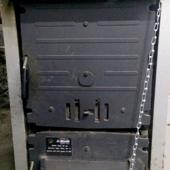 The second modification involved the wiring of both boilers. As originally installed, it was possible to heat with both boilers at once: For example, I could have the woodburner going but if the thermostat kicked in the oil boiler could start up and also start pushing water through the radiators. That sounds nice, but the problem is that two different boilers should technically not be sharing the same chimney, especially not at the same time. Plus I wanted to make sure that when I'm burning wood, I'm actually saving money by not burning any oil. So I would have to make sure the thermostat was turned down before starting a fire, and then remember to turn it back up later.

So the way it works is: I set the dial for about 8 hours to start. The draft inducer kicks on, which makes it easy to get a fire going. The oil boiler won't do anything for the next 8 hours. (The draft inducer also is hooked up to a temperature sensor that turns it off when the water temp gets north of 200 degrees F... that's never happened, though.) Then when the water temp in the woodburner hits about 130-140 F, its cicrulation pump kicks in and starts heating the house. Every time I feed the fire, I check the timer and make sure it's got at least 4 hours on it. At night, I feed the fire one last time and set the timer for 6 hours. By the end of the 6 hours (roughly 4-5am), the fire has pretty much burned out, the draft inducer is shut off, and the oil boiler is ready to take over. 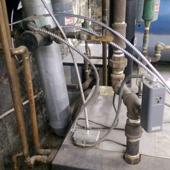 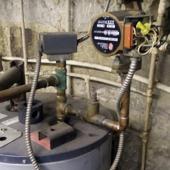 This isn't a modification I did, but I thought I'd also mention that the system is tied into a secondary hot water tank via a flat-plate heat exchanger, and when the woodburner is doing its thing we can get extra hot water. The primary hot water tank is electric, so this will also save us some money in the winter time. This works out well since Beth likes to get hot baths especially in winter. 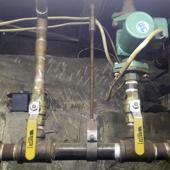 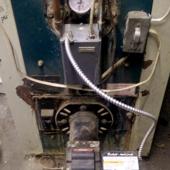 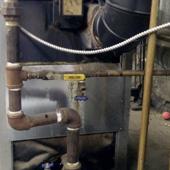 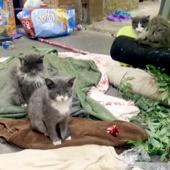 So far it all works well. I do have nighmares about repairs, though. But at least the stray kittens that have been living in the basement will have something interesting to watch from time to time.