Sorry for the recent silence here folks. I have to say that I haven't had a lot of nerdy stuff going on lately, at least nothing terribly interesting. But I figured I'd write about what actually has been going on to keep the content flowing. 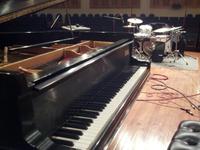 Starting with the most on-topic project: Darren, Brian and I have begun a recording for Junction PA. We've had one session so far and started by capturing drums, bass, and keys for 7 tunes. We'd like to go back through the best takes and re-record the keys on a 7-foot Steinway and either Brian's Wurly or my Rhodes (or both), to give the keys higher-quality sound. The drums and bass both came out really well, with a great balance between attack, clarity, and ambiance overall. I'll try to keep blogging about our continued progress on this project, it's been a lot of fun so far.

Slightly less on-topic, I've started renovating my living room. The eventual plan is to move the "den" setup (projector, stereo, old video game systems, etc) back out into the living room where they once were. Before I do that though, I wanted to get the carpet pulled up to reveal the hardwood floor, and I wanted to replace the crumbling plaster on the one wall with new drywall and top it off with a rough-cut lumber look. Then after the living room is set up again, I'll go to work fixing up the "den" (I put it in quotes because it's actually just a spare bedroom) to turn into a mixing + producing + PC gaming room. Then I can run the 24-channel snake down into the rehearsal room, which is directly below. It won't be as nice a setup as it would be with all the recording gear in the basement, but I don't want that stuff to be down there without taking care of the occasional water build-up first.

Even less on-topic, I want to start organizing all my ~~junk~~ personal belongings, and set up a workbench. That way I can more easily get stuff out of the way, figure out what I need to get rid of, and keep workbench-projects going without having to tear down and stall progress all the time. I haven't started any of that yet, but I did get some manly Milwaukee power tools (circular saw and a corded hammerdrill) to make it possible, which is the real point of this paragraph. :) 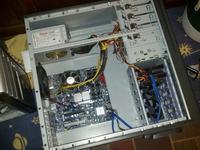 I'm still helping out with some of the behind the scenes stuff over at KBMOD.com, mainly web-server maintenance and development. I've started learning about a few different forum systems to do a re-implementation for them... doesn't look like it's going to be easy! To facilitate development, I set up a server at home that myself and a few other developers/designers have access to. One thing I'm pretty happy about is that I was able to set up a script on the live web server that backs up the site to the development server once every hour. Then on the development server, I have another script which converts the backup site (changes the config files and database) so that it runs correctly on the dev server. Then the whole dev server gets snapshotted (incrementally backed-up) to a second hard drive. So I'm pretty confident that if the live site ever gets hacked or brought down we'll be able to get it back up in short order. 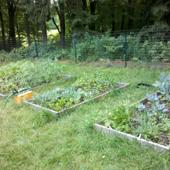 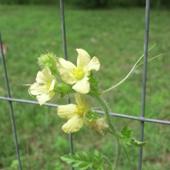 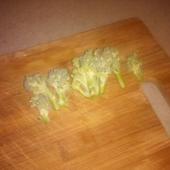 And for the least on-topic news, the garden is doing pretty well this year in spite of the drought. I even have a little watermelon, which surprised me. Aside from that, I've already harvested (and eaten) some broccoli, cherry tomatoes, zucchini, and peppers. One head of cauliflower is just about ready, and some cucumbers are close as well but they're so small and round this year it's hard to tell if they're actually ripe or not.