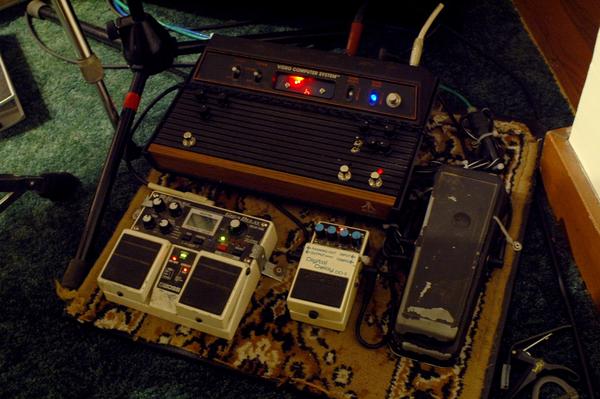 So here's one of those projects that sort of randomly materializes while rummaging through old stuff in the attic. I was looking for an enclosure to build a sort of "multi FX analog stompbox" for my guitar rig, when I found an old broken Atari 2600 in all its faux-wood-trimmed glory. Immediately the wheels started turning and I began taking it apart to see how much room was in there. Turns out there's quite a bit of space, so I took to fitting a Line6 power supply PCB I'd recently scored on eBay into the bottom, and fitting the guts of a TU-2 tuner pedal, A/B switch, tremolo, and tube screamer clone into the top. Never has the Milwaukee rotary tool seen so much action. 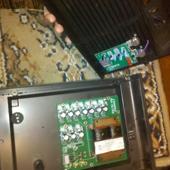 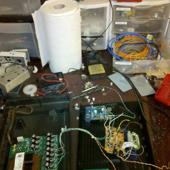 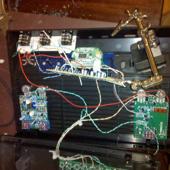 Unfortunately my original design was full of fail because the power transformer ended up right next to a bunch of unbalanced, guitar-level signal wires. So the thing buzzed like crazy when I put it together, and no amount of shielding trickery could eliminate it. The next thing to try, then, was moving the supply into an external enclosure. For this, I found an old failed network hard drive (actually the little mainboard is fine, just one of the drives failed... don't get me started on the stupidity of RAID-0) and gutted it. After adding a fuse and properly tying the enclosure to ground, I ran 8 discreet 9-volt DC lines out of the enclosure via CAT5 cables and added an RJ45 jack to the back of the Atari. 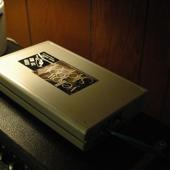 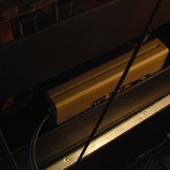 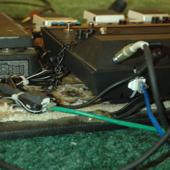 The next iteration will likely incorporate two or three more pedals in the Atari, since there was plenty of room in there when I was done. What I'd really like though, is to grab the guts out of a newer-generation 2600 and mount them in there too, so it still functions as a game system.

After a hectic day of finishing this project up, I used the set up at a gig that night (the Repeal Day Brew Fest in Sharon, PA) and I was really pleased. The pedals, unlike my previous wall-wart-powered rig, were totally noise-free. The only annoying thing is that it's a little difficult to turn the tuner on and off using my feet (since it's turned on and off via the original Atari switches). Some sort of additional foot-friendly momentary button may need to be added at some point.