Crawling in the Dungeon

Note: this was edited from an e-mail I sent to my brother-in-law, which I thought deserved some space on the blog since I haven't talked about games much on here yet. 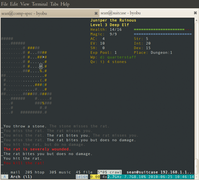 I've been poking around on the internet for the last couple days, looking into a genre of game called Roguelike, a.k.a. dungeon crawlers.  These games seem to be sort of the precursor to modern RPGs and are largely inspired by Dungeons & Dragons (a role-playing board game).  They have a few defining characteristics:  Randomly created dungeons for maximum replayability value, permanent death (i.e., you can save your game as often as you want but once your character is dead, that's it), and turn-based play.  I'm not really qualified to do a full-on review of them because I'm just messing around (and I'm not very experienced in terms of RPGs), but I thought I'd throw out some links if anyone wanted to try any of them out. We're talking super old-school here... the simpler ones (graphically) require some imagination but seem like they could be pretty cool once you're used to them-- and the purists say the DOS-style graphics are the only way to go.  Most of them are keyboard-controlled so if there's a built-in tutorial or instructions I recommend going through them to learn the shortcuts.

First, some links for general info and history:

Edit 2021: I replaced a couple of these links with Wayback Machine links because the sites no longer exist, sadly. 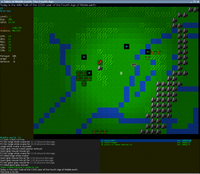 And now some games... I checked to make sure there are Windows versions of all of these (there are, of course, Linux versions because the whole phenomenon began on Unix mainframes), and they all seem to be still pretty widely played and/or updated:

So far I've played NetHack and Dungeon Crawl Stone Soup.  NetHack was my first venture into the genre, a few months ago, which ended badly and left me somewhat disinterested -- the learning curve on these games is a bit steep for us modern gamers with our fancy "plots" and "controllers".  But earlier this week I played a few rounds of Dungeon Crawl Stone Soup and found that there was a tutorial built-in, which helped me grasp some of the basic concepts (and keyboard commands).  After quickly killing off the first two characters I created (Rigot the Mountain Elf and Buttons the Minotaur), I finally got into the swing of things and completed my first dungeon level.  So the seed has been planted. 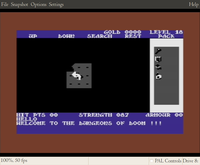 Besides the games listed above, there are tons more -- such as the original Rogue, the one that made the genre popular-ish, and a vast swath of games created by an online community of Roguelike fans.  They even have create-a-Roguelike-in-a-week competitions, called 7DRLs.

Some of the older games require a DOS environment,  which you can get by using DosBox.  I recommend grabbing a frontend for DosBox from their download page as well, which allows you to save per-game configurations and launch them with a few clicks.  There are also Roguelikes available for other systems, such as Commodore 64 and Amiga (for which there are also emulators available).

As a side-note, another game that is more of an old-school action/adventure RPG with pre-made levels (and was written because the author didn't like Rogue), is the Kroz series, which 3d Realms (formerly Apogee) recently released as freeware -- you'll definitely need DosBox for these.  I remember a friend of mine playing this on his wicked fast Pentium computer under DOS 6 back in elementary school.